We will miss you Aileen

A friend of ours passed away last night. For us it is not really a surprise because for over 3 years Aileen has been battling with the killer disease. She had ovarian cancer, at first after a series of chemotherapy we thought she'll be ok. We witness how she regained her hair after loosing all of them..from bandana to new curly hairs. We were happy then with the healing progress.

Until last year the cancer cells went active again. She had to undergo chemotherapy treatment all over again. This time it's different, she had other complications. Last March she complained of severe stomach pain which eventually led to an operation. Since then her recovery is too slow and most of the time she's confined in the hospital.

Just 2 weeks ago, they celebrated their silver wedding anniversary. It's one of the most unforgettable wedding ceremony i have attended. Most of the visitors cried upon seeing Aileen and Adlai. Aileen is still confined in the hospital at that time. She has to be brought in the wedding venue using an ambulance and a wheelchair to carry her inside. As they enter the reception hall, tears begun to fall in Aileen's eyes and so are we. Later during her speech she told us that it was the first time she was not involved in the preparation for a special occasion. We learned it was actually a surprised from her husband and 3 kids. She said all she was asking was a simple celebration, after all of the millions of pesos they have already incurred for her treatment. Her family really did a great job because the occasion was well planned. Guests were able to come even if they came from as far as bicol and bataan.

I remember Adlai during his speech, he talks about his fears, we thought it was because Aileen might not make it that day, but being a person with a good sense of humor this is what he said, "Today I have to two fears, first is that the visitors might not come and the second is, Aileen might say "no" to the priest when she's ask to renew her marriage vow with him. Everybody of course just laugh which makes the mood a little bit lighter.

Since we've known them only for 4 years, I was all ears at the ceremony's trivia portion. Their friends shared their stories about how Aileen and Adlai met 25 years ago. The celebration was indeed unforgettable not just to the couple and his family but also to all of us who witnessed how great is their love for each other. That in sickness and in health they are one, and as a family they will try survive.

But our life is not ours..it's time to let go. She already suffered enough just to stay longer and be with her loved ones.. now it's time to rest with her Creator. Though Aileen is gone, her memories will remain in our hearts.

Goodbye Aileen.. we will miss you... 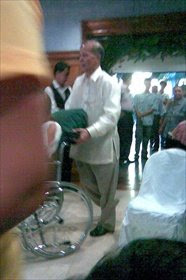 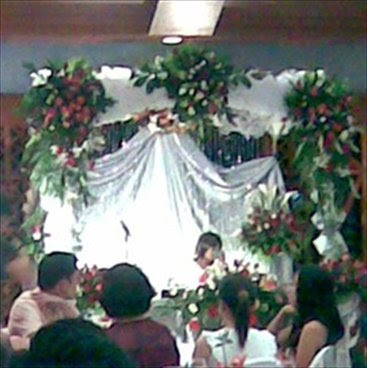 Taking a sip of air from an oxygen tank. She wears a nice wig chosen by her son.

at May 16, 2008
Email ThisBlogThis!Share to TwitterShare to FacebookShare to Pinterest
Labels: friends