Last December my kids had an educational tour at Bio Research Pet Hypermart in Manila. They have what they call 101 Destination Points which caters to the needs of hobbyists, petshop owners and pet breeders. Here you can find different animals such as rabbit, dog, cat, hamster, fish, bird, and a lot more. At Bio Research you can also buy the accessories needed for the pets like the fish bowl, fish meal, sunflower seeds and cages for the hamster.

They were so cute! so when my kids asked their dad to buy them fish and hamsters he just can't resist. Kaya tuloy naubos ang baon nilang pera nakalimutan na nila ang pasalubong nila para sa kin! lol Anyway the pets are worth keeping, my kids were happy and that makes me happy as well.

We are clueless about how to take care of the hamster so I did some research and here's what i found at Wikipedia:

Hamsters are rodents belonging to the subfamily Cricetinae. The subfamily contains about 18 species, classified in six or seven genera. Because they are easy to breed in captivity, hamsters are often used as lab animals and kept as pets in more economically developed countries. Recently hamsters have become established as popular small family pets.

Their diet contains a variety of foods both in the wild and when kept as a pets including dried food, berries and nuts. Fresh fruits and vegetables are also an integral part of their diet. Behavior can vary depending on their environment, genetics, and interaction with people.

Hamsters are stout-bodied, with tails much shorter than body length and have small furry ears, short stocky legs, and wide feet. Their thick, silky fur, which can be long or short, can be black, grey, white, brown, buff, yellow, "sapphire" or red depending on the species, or a mix of any of those colors. Underparts vary in color from white to shades of gray and black. The tail is often difficult to see; usually it is not very long, and on a long haired hamster it is barely visible. Hamsters are very flexible; and their bones are somewhat fragile. 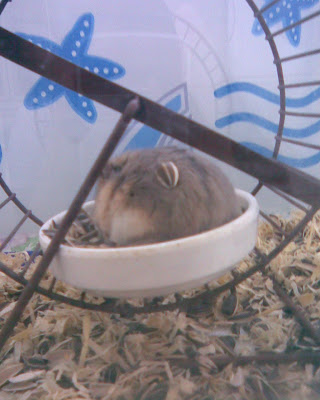 Like all pets, hamsters need exercise and entertainment to maintain their physical and mental health. "Exercise wheels" allow hamsters to run full speed, and are a common fixture in pet hamsters' enclosures. Avoid using wheels with individual rungs or bars but rather select those with a solid base for comfortable running. This is because a hamster may trip and its legs may get caught on the rungs of the wheel while using it. It is also important that the wheel is big enough for the full adult size of the hamster, so a Syrian would require a wheel at least 8 inches in diameter. 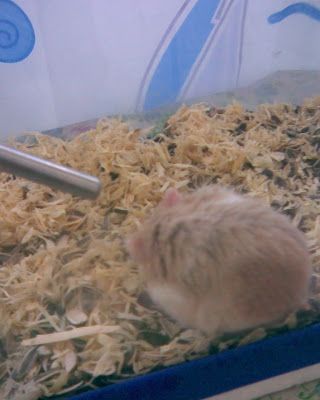 Hamsters groom itself after a dust bath. Hamsters can not be given water baths, it can stress them out and cause wet tail, and it also increases the risk of them catching pneumonia. 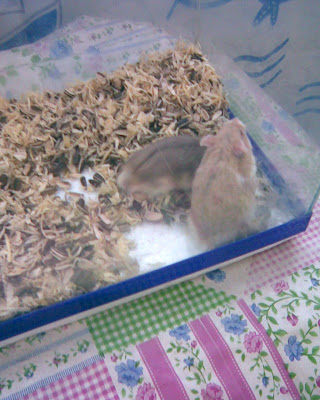 Hamsters become fertile at different ages dependent on their species, but this can be from one month to three months of age. Male hamsters remain fertile for the rest of their lives, though females do not. Females are in heat approximately every four days. 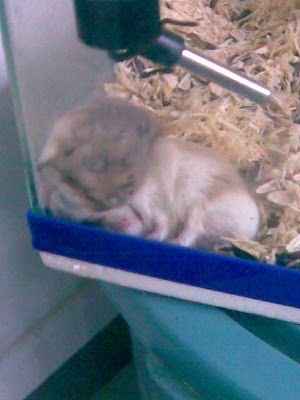 They're so sweet together =) 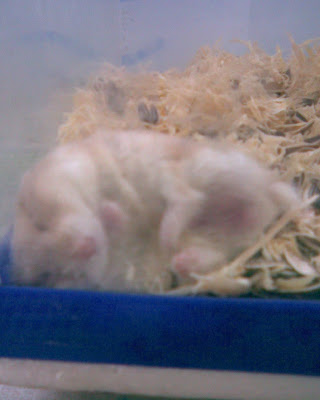 According to Feng Shui, it's nice to have pets that belong to the rat family because it's the Year of the Rat. I hope it's true! we certainly need lots of good luck this year! lol
at June 14, 2008
Email ThisBlogThis!Share to TwitterShare to FacebookShare to Pinterest
Labels: pet