Typhoon Frank left at least 118 dead yesterday but the toll is expected to rise dramatically when the dead from a sunken ferry boat are counted as the typhoon slowly drifted to the Pacific Ocean but not after leaving a wide swath of destruction in a two-day rampage that left the country battered and helpless. 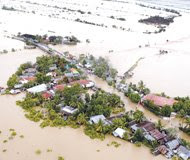 The death toll from the sunken MV Princess of the Stars might reach as high as 700 as rescuers found almost no survivors from the capsized ferry which carried as many as 800 listed passengers on its manifest.

Some of the dead from the sunken ship were washed ashore by afternoon Sunday. Rescue operations were hampered by the swollen and angry sea, the fate of the passengers left at the mercy of the elements.

Radio reports said at least 10 bodies had been found while three survivors pulled ashore and told tales of horror, heroism and survival.

One of the survivors, Renato Lenario, told rescuers during a radio interview that they were having lunch at around 11:45 a.m. Saturday when the boat started listing and orders were barked to abandon ship.

He said he was lucky to survive after drifting aimlessly at sea in a capsized life raft. Two other companions who were in the same raft dropped away when a huge wave hit them, he said.

The typhoon caught many Metro residents sleeping as the storm, which a day earlier rampaged in the Visayas and Bicol, made an unexpected -- and deadly -- turn toward the country’s capital hitting it at dawn.

That the typhoon came on a Sunday probably helped reduce casualties. Residents were mostly in their homes and looking forward to a day of rest.

But the rest turned to panic for many. They spent most of the day trying to protect their homes, property and lives as the typhoon pummelled the city with a force unmatched since 2006 when typhoon Millenyo ravaged the city with over 200-kph winds and brought it to its knees.

Metro Manila was not the only one which bore the brunt of the typhoon’s wrath yesterday.

The swath of destruction covered central Visayas and nearly the entire Luzon as the typhoon trudged slowly like a massive invading army leaving death and destruction behind.

There was suffering in Romblon, Mindoro, the Bicol provinces of Camarines and Albay and also Quezon, Batangas, Laguna and Cavite.

PAGASA said the typhoon will also most likely hit the northern provinces of Northern Luzon.

Authorities have estimated that millions worth of property, crops and infrastructure have been damaged.

The amount of damage is expected to rise, and with it, the death toll as reports come in from various parts of the country some of which have been isolated by power outage, floods and landslides.

President Arroyo, who left Sunday for a state visit to the United States as the typhoon was heading towards the country, called the National Disaster Coordinating Council yesterday morning and was surprised to learn that the sea tragedy may been caused by negligence on the part of the Coast Guard.

She scolded Coast Guard Commander Wilfredo Tamayo during a conference call during which she asked why a ship was allowed to leave when they knew a typhoon was approaching.

The Princess of the Stars, with 800 on board, 45 of them children, sunk on the way to Cebu hours after leaving the port of Manila.

Tamayo said the order to call off all trips from the port of Manila was issued at 11 p.m. Friday. By then, the Princess of the Stars owned by Sulpicio Lines was already out to sea for three hours having left at 8 p.m.

Coast Guard officials said the ship developed engine trouble and as a result was practically helpless against the strong waves generated by Typhoon Frank.

Adding to the citizens’ woes, power outage was reported in many parts of the country.

In Metro Manila, power interruption was recorded in all the major cities as early as 3 a.m. Gradually, power was restored and by evening, the metropolis was alight and slowly returning to normal.

Signal No. 3, which covered the city and nearby Cavite, Laguna Batangas, Bulacan Pampanga and Tarlac, was downgraded to No. 2 by evening and should be No. 1 by Monday morning or afternoon.

PAGASA expects weather to return to normal by Wednesday although rains are still due today and tomorrow.

Classes in many cities will be suspended today.

A rescue ship battling huge waves and strong winds reached the MV Princess of Stars, one end jutting out of the water upside-down, more than 24 hours after it lost radio contact Saturday

``They haven’t seen anyone. They’re scouring the area. They’re studying the direction of the waves to determine where survivors may have drifted,’’ coast guard spokesman Lt. Senior Grade Arman Balilo said.

Villagers found four bodies _ including a man and a woman who bound themselves together _ along with children’s slippers and life jackets that washed ashore nearby.

The death toll included 59 people who drowned in the central province of Iloilo, with another 40 missing, Gov. Neil Tupaz said.

``Almost all the towns are covered by water. It’s like an ocean,’’ Tupaz said, adding thousands have been displaced in the province that is home to 1.7 million people.

TV footage showed rescuers using a long rope across raging floodwaters in an Iloilo village to pluck three residents to safety from atop a partly engulfed van. In a nearby village, residents pulled a body from a muddy field then laid it beside another they found earlier.

At least three survivors were found in Sibuyan’s Mabini village and police were ordered to go there. But all the roads to the village, where many houses were washed away by huge waves, were blocked by toppled trees, Tansingco told DZBB radio.

She appealed for food, medicine and formalin to embalm bodies, apparently expecting many deaths in her town. The upturned ferry could be seen from her town, she said.

Packing sustained winds of 74 miles (120 kilometers) per hour and gusts of up to 93 mph (150 kph), the typhoon shifted course Sunday to the northwest and battered Manila at dawn.

President Arroyo directed the defense department and local governments to be on standby for relief and rescue missions before she left for the United States late Saturday.

Ferries are the main form of inter-island transportation in the sprawling Philippine archipelago, site of the world’s worst peacetime maritime disaster when the ferry MV Dona Paz sank in 1987, killing more than 4,341 people.

A man and his 10-year-old grandson were killed when a landslide buried their hillside shanty in Cotabato city Saturday, Mayor Muslimin Sema said.

at June 23, 2008
Email ThisBlogThis!Share to TwitterShare to FacebookShare to Pinterest
Labels: News / Reviews