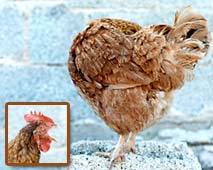 I was surfing and blog hopping when an article caught my attention about this rooster that still lived for 18 months after it's head was chopped off. It's a strange story but it's true. The farmer who owns this rooster thought he was just putting dinner on the table when he picked up an ax and beheaded one of his chickens. The story of the chicken became a legend. The chicken was later dubbed as Mike and it's hometown Fruita even celebrated a festival called "Mike the Headless Chicken Day" in honor of one of its most famous citizens.

So how was Mike able to survive? Scientists examined him and determined that Mr. Olsen had not done a very good job at chopping Mike's head off. Most of the head was actually removed, but one ear remained intact. The slice actually missed the jugular vein and a clot prevented him from bleeding to death. Apparently, most of a chicken's reflex actions are located in the brain stem, which was also largely untouched. Mike was also examined by the officers of several humane societies and was declared to have been free from suffering. Mike was fed and watered by inserting an eyedropper directly into his gullet. Sadly, he later choked to death in a motel room.

To know more about the story of Mike the headless chicken visit it's official website at http://www.miketheheadlesschicken.org/Happy weekend and God bless you all!
Straight from my heart,

at August 30, 2008
Email ThisBlogThis!Share to TwitterShare to FacebookShare to Pinterest
Labels: Amazing Story