Filipinos love barbecue. Where there is smoke and the rich aroma of meat cooking on a grill is where you'll find barbecue addicts. This explains the success of many barbecue business ventures in the country. 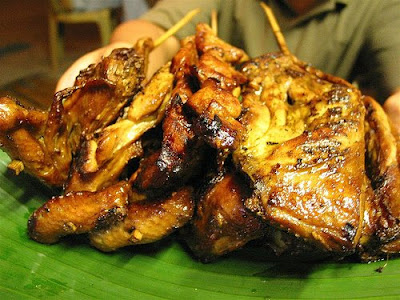 A recipe from a food magazine caught my attention. It's a restyled recipe of chicken inasal. The large cuts of meat were reduced to smaller portions using boneless and skinless chicken breasts that were cubed. The skewers used were smaller too. The original marinade recipe was followed but the resulting dish took on a healthier and more refined look and taste.

The ingredients are as follows:

If you're not familiar with sukang sinamak, here's how to prepare this infused vinegar:

In a clean long neck bottle, pour in the vinegar then add the garlic, ginger and chilis. Cover and let stand overnight before using to allow the infusion of flavors. Reserve for future use. Add more vinegar to the bottle as the vinegar is used up.