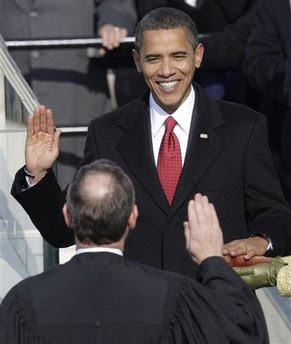 US President Barrack Obama takes his oath as the 44th and the first black president to occupy the White House. The first African-American President of the United States, has called his swearing-in-ceremony as "A New Birth of Freedom," he had chosen to use former US President Abraham Lincoln's phrase "A New Birth of Freedom" to mark the historic occasion. Obama emulated Lincoln, who was instrumental in liberating the Black Americans from slavery. The theme is also chosen for the Inauguration by the Joint Congressional Committee for Inaugural Ceremonies and commemorates the 200th birth centenary of Abraham Lincoln. Abraham Lincoln is considered as Obama's idol.
Today a new chapter has been opened not only in American history, but also in the world history. The world community generally believes that Obama and his team could save US from recession and world from the US-triggered global financial crisis, and likewise improve US geopolitics and world peace. Experts believed that Obama could succeed by focusing his domestic policy on consensus-building and economic rescue and anchoring his foreign policy on cooperation and calculated response.
Well i believe the world's future is not only in the hands of a powerful man or people, but our future is in the hands of our God. When Moses led the Israelites to freedom, he's not a powerful man.. he's just an ordinary man who believe and trust in the power of God.
We can only experience " New Birth of Freedom" if we obey what God said in His words:
"If my people, which are called by my name, shall humble themselves, and pray, and seek my face, and turn from their wicked ways; then will I hear from heaven, and will forgive their sin, and will heal their land."-2 Chronicles 7:14
at January 21, 2009
Email ThisBlogThis!Share to TwitterShare to FacebookShare to Pinterest
Labels: New Birth of Freedom, US President Barack Obama Inauguration