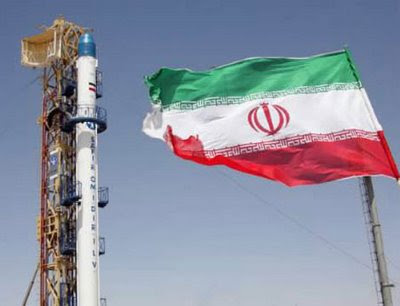 Iran has launched its first domestically manufactured satellite into orbit which raised fresh concerns among world powers already at odds with Iran over its nuclear drive. The Omid (Hope) satellite was sent into space on Monday evening carried by the home-built Safir-2 space rocket, Iranian news agencies reported.
The launched coincides with the 30th anniversary of Islamic revolution. President Mahmoud Ahmadinejad on a state television said, "Dear Iranians, your children have put the first indigenous satellite into orbit, with this launch the Islamic Republic of Iran has officially achieved a presence in space."

US President Barack Obama has offered to open a dialogue, but White House spokesman Robert Gibbs expressed disappointment with the Iranian move following the overtures made by the new US president. "This action does not convince us that Iran is acting responsibly to advance stability or security in the region," Gibbs told reporters. "All of this continues to underscore that our administration will use all elements of our national power to deal with Iran and to help it be a responsible member of the international community," he said.

In London, British Foreign Office minister Bill Rammell voiced "serious concerns" over the launch. "This test underlines and illustrates our serious concerns about Iran's intentions," Rammell said in a statement, adding that Britain was still carrying out technical analyses.

The launch comes at time when Iran is ignoring repeated UN Security Council demands to freeze sensitive nuclear work. The West suspects Iran of secretly trying to build an atomic bomb and fears the technology used to launch a space rocket could be diverted into development of long-range ballistic missiles capable of carrying nuclear warheads.

Iran vehemently denies the charges, saying its nuclear program is for peaceful energy purposes only and that it has the right to the technology already in the hands of many other nations including archfoe the United States. Ahmadinejad said the satellite carried a message of "peace and brotherhood" to the world and dismissed suggestions that Iran's space program had military goals. "We have a divine view of technology unlike the dominating powers of the world who have Satanic views," he said.

This news is a serious matter and for me there's a reason to be alarmed. So we should pray and seek God's divine intervention. I hope the leaders of Iran government really meant what they said: the satellite carried a message of "peace and brotherhood" to the world.
at February 04, 2009
Email ThisBlogThis!Share to TwitterShare to FacebookShare to Pinterest
Labels: Iran Satellite, Satellite technology