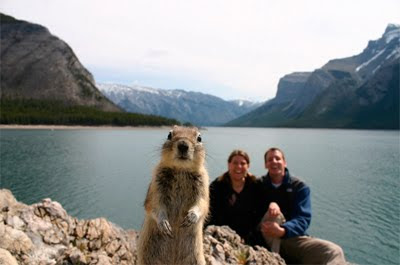 This picture came out I think last week but the Squirrel Vacation Picture is still hot on searches. No doubt because it’s really cute!
In this photo, Melissa Brandts and her husband whose on holiday stopped to take a self-timed photo on the banks of Lake Minnewanka in Banff National Park. The couple was interviewed and here’s what they said about how the squirrel steals the show:

“We had our camera set up on some rocks and were getting ready to take the picture when this curious little ground squirrel appeared, became intrigued with the sound of the focusing camera and popped right into our shot,” Melissa told the Telegraph of London. “It was a once in a lifetime moment - we were laughing about this little guy for days!”.