I was saddened when i learned that Shiloh Pepin died yesterday, October 23 at Maine Medical Center. I've been following Shiloh Pepin known as the Little Mermaid girl and whose story touched the nation since the release of a special documentary about her.She passed away at the age of 10. Recently, she appeared in two TV specials on TLC and on "Oprah” Sept. 22. 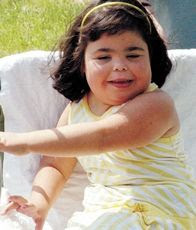 Shiloh's mother, Leslie, said earlier this month Shiloh came down with a cold that quickly turned to pneumonia. She was rushed to Maine Medical Center on Oct. 10. As bacteria swept through her body the doctors quickly placed Shiloh on antibiotics and a ventilator. Leslie said Shiloh's heart stopped at one point, but doctors were able to get it started again. The doctors also struggled to keep her body from swelling with fluids because Shiloh's kidney had stopped working. “She's a tough little thing,” Shiloh's mother said of her daughter earlier this week. News report says, "Elmer her father stayed by her side throughout her ordeal, while throughout the nation, people who had come to know Shiloh through hearing her story added their prayers."

Shiloh has become an inspiration to many, her acceptance on her disability and the strong will to overcome any obstacle. This sweet little girl will always be remembered.