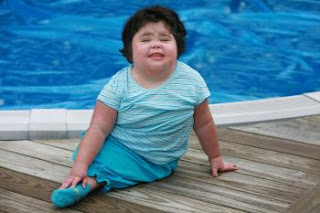 Have you seen this little girl on youtube? She’s Shiloh Pepin known as the “Little Mermaid Girl.” Shiloh Pepin was born with rare congenital deformity called Mermaid Syndrome or Sirenomelia.
Sirenomelia is a lethal birth defect of the lower body characterized by apparent fusion of the legs into a single lower limb giving the appearance of a mermaid's tail. The condition only occurs in one of every 100,000 births, with persons passing within 48 hours of birth.
Mermaid Girl Shiloh Pepin became famous when a recent documentary was made about Sirenomelia. Shiloh Pepin is one only three people in the world surviving with sirenomelia.